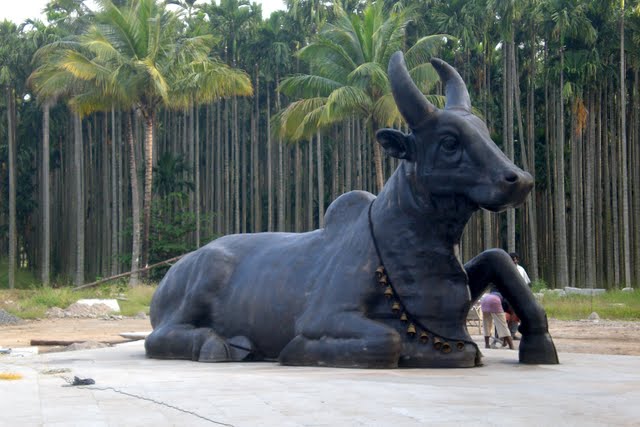 Once, there was a man named Shilada. He was a huge devotee of Lord Shiva. He yearned for a son who was blessed by Lord Shiva. One day, he woke up early to plough his field.

As he walked through the field, he saw a glowing light coming from in between the grass. He walked up to the light, and saw a baby! Shilada then heard a voice from the skies. “Take care of the baby like your own.”Shilada was extremely happy and took the baby home. Naming him Nandi, Shilada took care of the baby boy.

Years later, two sages named Mitra and Varuna came to his house. They had been walking through different temples and pilgrimage centers, and wanted to rest for a while. Shilada gladly agreed to let them stay and offered them food and refreshments.

Shilada realized that the fields needed attending to. Calling Nandi to take care of the guests, he rushed out. He came back and found the sages in conversation with Nandi. “We have overextended our stay. We must be on our way. Thank you for your hospitality.” Saying so, they blessed Shilada. “Shilada, may you live long!”

Nandi waited outside, and the sages blessed him as well. As Nandi fell at their feet, the sages looked sad. They spoke slowly. “Nandi, may you be good to your father and your teachers.” The sages left the house and walked on.

Shilada noticed that the sages seemed to be in sorrow. He ran after them and stopped them. “Dear sages, I could not help but notice that you look sorrowful. Was our hospitality not up to par? Is there anything wrong?”

The sages looked at each other as if wondering whether to share the information or not. The sage Mitra spoke up. “Shilada, you were a wonderful host. However… I am afraid that your son does not have much longer to live.”

Shilada stared in shock. “What do you mean?”

The sage Varuna answered this time. “Shilada, your son Nandi is a wonderful boy but is not destined to have a long life. The fact that he has come to this age is in itself a miracle.”

Not wanting to upset Shilada further, the sages left. Shilada looked at their shrinking figures as they walked on. Noticing that it was dark, Nandi went to call his father. He saw his father staring into the distance with stooping shoulders. Sensing that something was wrong he ran to him.

“Father, what is wrong? Why do you look sad?”

Shilada said nothing for a while. Slowly, he narrated the conversation of the two sages. He expected Nandi to burst out crying, or to be extremely scared. He was however, surprised at Nandi’s reaction.

Nandi burst out laughing. “Father, how can you be sad over the words of those sages?” Shilada looked at Nandi in confusion. He could not understand the reason behind Nandi’s laughter. “Nandi, what do you mean?”

“Father, Lord Shiva himself has blessed me. If I am to have a short life, Lord Shiva must have different plans for me! Do not act so! Lord Shiva will help me!”

Shilada was not reassured by the words of his son. “Nandi, I am afraid for you. How are you so sure that Shiva will help us?”

“Father, I have never seen you doubt Lord Shiva’s capabilities. Do not fret, the lord will help us. I shall perform penance to please him.”

Saying so, Nandi approached the river Bhuvana. He fasted, prayers being the only words uttered. It is said that Nandi’s devotion was so real that Shiva appeared almost immediately. Some stories say that he performed three months of intense prayer, Lord Shiva finally appeared. “Nandi, I am very pleased with your devotion. However, today is your last day on earth. Your devotion pulled me to come to you instantly. It is so powerful! Ask me anything, and I shall give you it.”

“Oh Lord, I wish to be with you always.”

Shiva smiled. “Nandi, my vahana (vehicle), a bull, has just passed away. I am in need of a bull. From now on, you will have the face of a bull, and will lead my Ganas*. You will be my vehicle, my adviser, and my friend.

Stand up, o Nandi. The world will know of you!”

Nandi stood up with tears in his eyes. The Lord had given him what he wanted, and more! This is the story of how Nandi saved himself, AND rewrote his own fate!